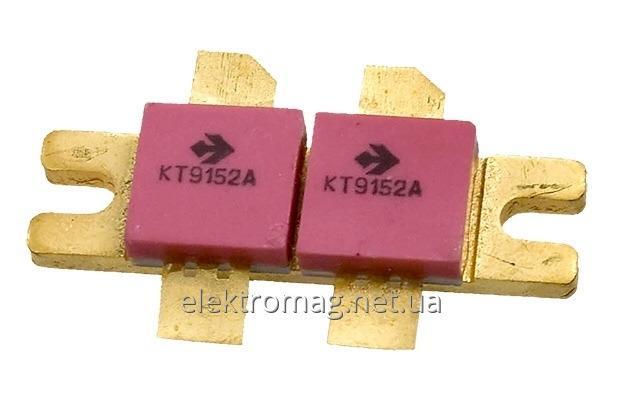 KT9152A
Transistor assembly of KT9152A from two silicon epitaxial and planar structures of n - p - n of generating transistors.
It is intended for application in broadband duple amplifiers of power in the class AV mode in the scheme with the general emitter in the range of frequencies of 470.. . 860 MHz at the supply voltage of 28 Century.
In chains of emitters ballast resistance are included.
Is issued in the ceramic - metal case with strip conclusions.
The type of assembly is specified on the case.
A lot of assembly is no more than 20 g.
Case type: KT - 82.
Specifications: TU ADBK.432153.007.

Main technical characteristics of the KT9152A transistor:
• Structure of the transistor: n - p - n,
• Rk max t - the Constant disseminated collector power with the heat sink: 246 W,
• Ukbo max - the Maximum tension of the collector base at the set return current of a collector and the opened emitter chain: 55 V,
• Uebo max - the Maximum tension the emitter base at the set return current of the emitter and the opened collector chain: 3 B,
• Ik max - the Most admissible direct current of a collector: 24 A,
• Ikbo - the Return current of a collector - current through collector transition at the set return tension of the collector base and the opened emitter conclusion: no more than 200 ma 55B,
• h21e - Static coefficient of transfer of current of the transistor for schemes with the general emitter: more than 10,
• Sk - the Capacity of collector transition: no more than 100 pf,
• Ku. R. - Coefficient of strengthening of power: not less than 6 dB at a frequency of 860 MHz,
• Rvykh - the Output power of the transistor: not less than 100 W at a frequency of 860 MHz