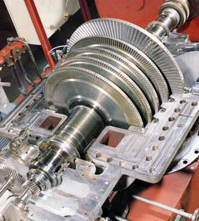 Steam Turbine
Steam turbines are devices which convert the energy stored in steam into rotational mechanical energy. These machines are widely used for the generation of electricity in a number of different cycles, such as:
* Rankin cycle
* Reheat cycle
* Regenerative cycle
* Combined cycle
The steam turbine may consists of several stages. Each stage can be described by analyzing the expansion of steam from a higher pressure to a lower pressure. The steam may be wet, dry saturated or superheated.
Consider the steam turbine shown in the cycle above. The output power of the turbine at steady flow condition is:
P = m (h1-h2)
where m is the mass flow of the steam through the turbine and h1 and h2 are specific enthalpy of the steam at inlet respective outlet of the turbine.
The efficiency of the steam turbines are often described by the isentropic efficiency for expansion process. The presence of water droplets in the steam will reduce the efficiency of the turbine and cause physical erosion of the blades. Therefore the dryness fraction of the steam at the outlet of the turbine should not be less than 0.9.

We created a Personal Account for you to make the process of buying faster and easier in the future.
برای فعال شدن از لینک در نامه استفاده نمایید که به ایمیل شما فرستادیم